Blood Fort was released on February 4th, 2010. These are the Blood Fort Expansion release notes, as they appeared on the official website.

The Refuge Camp is a new World Buildings that allows players to exchange their units for others of the same level from different races. For example, you will be able to trade Human Monk for an Undead Lich, as they are both level 6 units.

Players rejoice! The Guild system in Heroes of Gaia is receiving an upgrade, with the Blood Fort expansion being the first phase of the upgrade. Guilds will now be able to have their own buildings, located in the Guild menu and inaccessible by other Guilds for the current version.

These Guild buildings have three functions:


Every race has an opposing race for which there are special property buffs that affect battle. You will need to use the combat buff buildings for the effects to take place.

The race relations are shown below:

All Guild buildings require all members to assist in their construction. Significant investment is needed to advance your Guild in Gaia, and in exchange all members become stronger and more powerful with the progress of their Guild

One important thing to note is that the Guild leader must choose the Guild race (decision cannot be reversed), with each race having its own special combat skill.

To build and upgrade your Guild buildings, you need to access the Guild menu and click on the Guild Construction tab and continue from there.

The construction of some of the buildings requires the special race-specific items:

Guild Instances allow members to fight together side by side in the same battle in order to earn items, resources and experience. Now, senior Guildies will be able to train junior Guildies in battle and guide them to being great Heroes of Gaia.

You can access Guild Instances through the Guild menu.

Are you a high level player looking for extreme challenges? Meet your destiny.

The Tower of Babel has shaken Gaia to its core, with Heroes failing to reach the top in their challenge. But it is not the only danger. Dangerous beasts have risen from the dark and are terrorizing Gaia and only great Heroes (recommended – above level 70) should take on these awesome BOSS beasts from the underworld.

BOSS creatures can be challenged 3 times a day. Upon refresh, around 20 minions will appear on the Gaia worldmap, each of them stronger than Level 8 NPCs and offering double the experience. If players destroy all 20 minions, the BOSS will appear immediately and the first player to defeat the BOSS will earn massive experience as well as one level 60-70 equipment with 3 property buffs.

Hero Attribute Reallocation Card
Restrictions: Heroes below level 65.
Effect: Heroes may use this card to reallocate their level -1 attribute points as they see fit. The remainder of the points the hero’s total attribute points will be randomly distributed amongst all 4 stats. The level of the hero will not be affected by reallocation of attribute points.


Advanced Hero Attribute Reallocation Card
Restrictions: None
Effect: Heroes may use this card to reallocate their level -1 attribute points as they see fit. The remainder of the points the hero’s total attribute points will be randomly distributed amongst all 4 stats. The level of the hero will not be affected by reallocation of attribute points.

Advanced Hero Attribute Reset Card
Restrictions: ONLY Purple Heroes may use this card
Effect: The Heroes total attribute points will be randomly distributed to all 4 stats.

Accelerate Training Card
Effect: Decreases the training time of units by 50%. This card must be used BEFORE assigning units to be trained. This card may affect multiple units, if the player has the ability to train them. All units must be assigned to training within 3 hours of use.

Tavern Development Card
Effect: The Tavern will immediately be upgraded to level 10 upon use. This card must be used from within the Tavern.

Embassy Development Card
Effect: The Embassy will immediately be upgraded to level 10 upon use. This card must be used from within the Embassy. 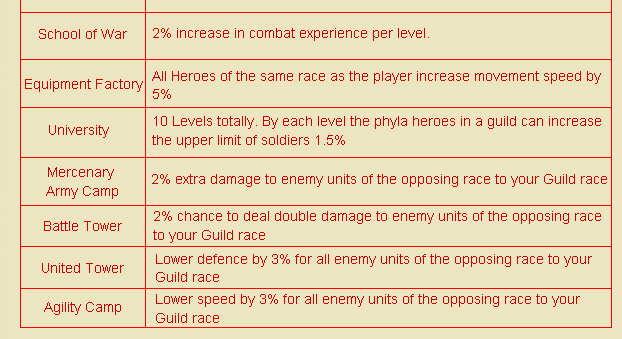 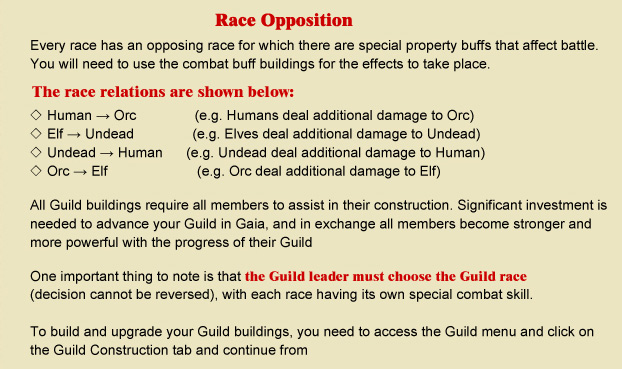 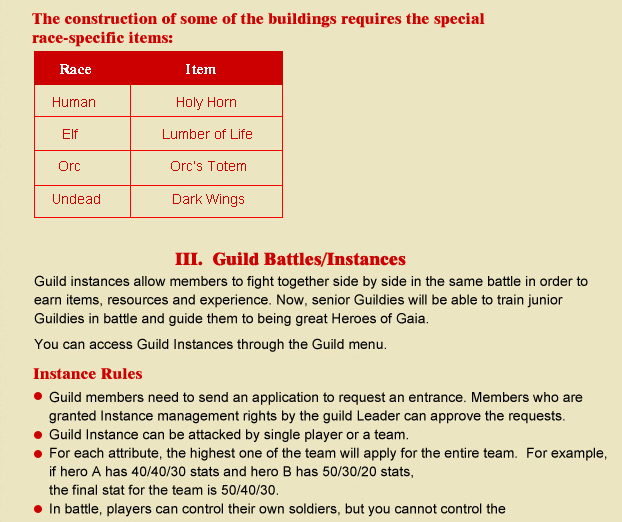 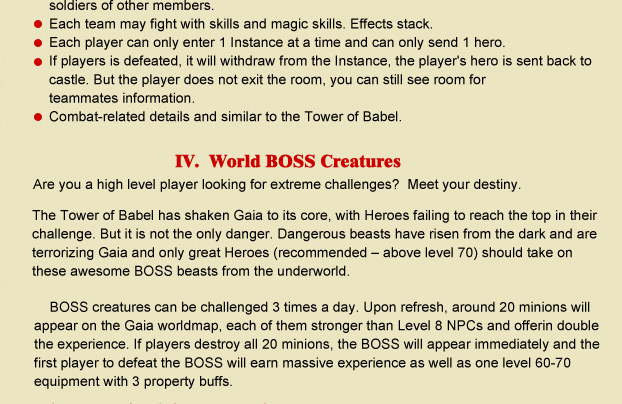 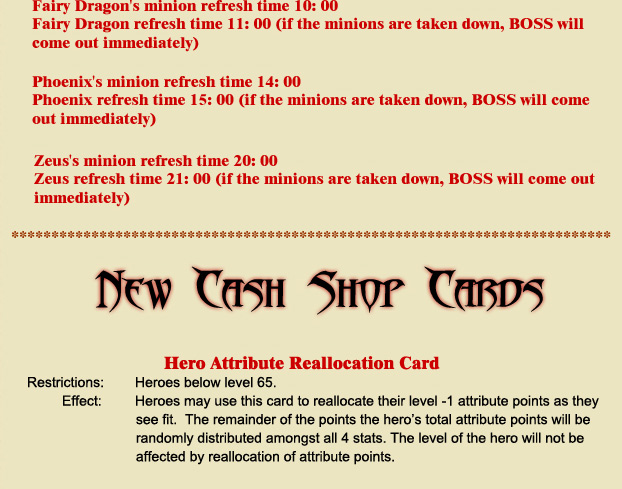 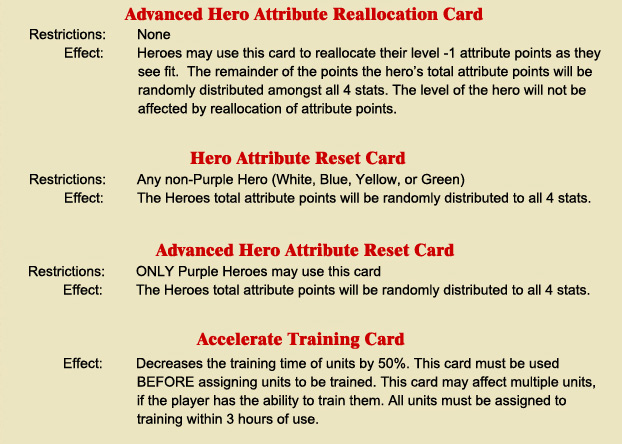 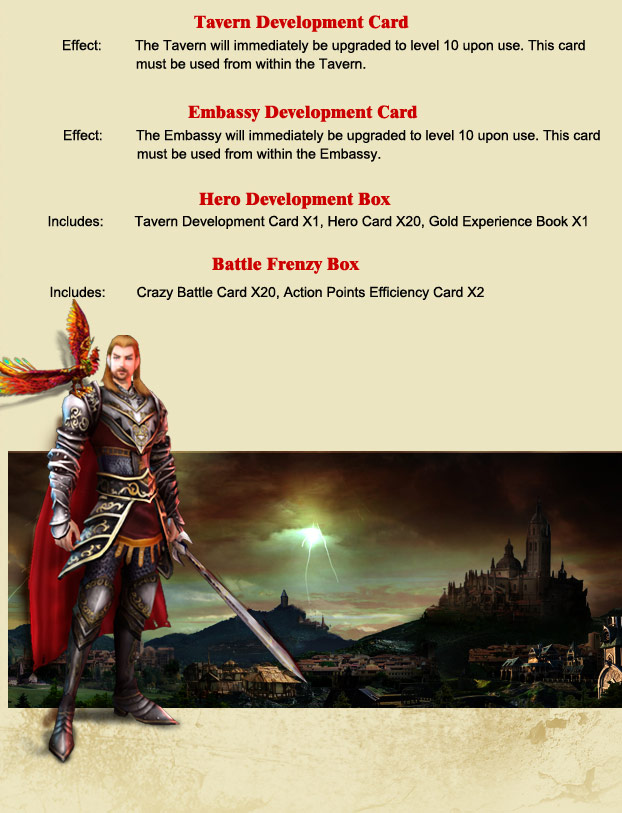 Retrieved from "https://heroesofgaia.fandom.com/wiki/Blood_Fort?oldid=20811"
Community content is available under CC-BY-SA unless otherwise noted.