Portals are a new World Building in the Heroes of Gaia: Babel expansion which allow heroes to another portal on the world map. Any hero using a Portal will have to wait 10 minutes inside the Portal before being allowed to proceed to the destination. This means that the minimum travel time using a Portal will be 20 minutes.

Using a Portal is relatively easy. There is no need to actually find a portal on a world map. 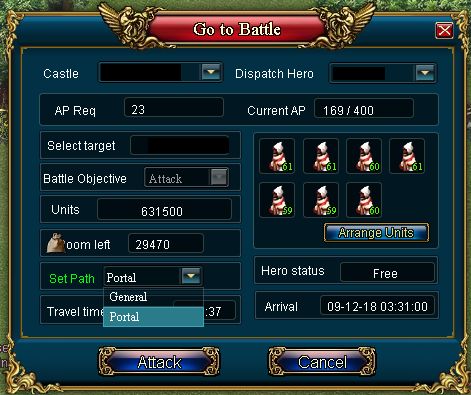 The default Set Path setting is General. Click General and the drop down will appear. Select Portal. The hero will automatically use the nearest Portal to reach the desired destination.

Note: The Portal has a 10 minute delay one way, so add 10 minutes to the time given to the destination on the Travel Time dialogue on the Go to Battle screen.

Unfortunately, the supposed travel time isn't very accurate. Sometimes, when two heros supposedly will hit a place at the same time, they actually differ by a few minutes.

Retrieved from "https://heroesofgaia.fandom.com/wiki/Portals?oldid=13334"
Community content is available under CC-BY-SA unless otherwise noted.